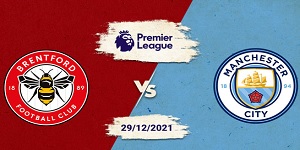 Brentford face Manchester City in the 20th round of the Premier League. Over the weekend, the "Bees" lost their visit to Brighton with 2:0. The "Seagulls" established their superiority on the field in the first half and led by two goals before the break. In the second half, Brentford increased the speed and could even the score, but did not take advantage of the situations. With 20 points, Brentford remains in 12th place in the standings.

Manchester City once again proved that the team is in the best shape in the Premier League, defeating Leicester 6:3. "Citizens" started the game impressively and by the 25th minute they were leading 4:0. Leicester still raised their heads and returned three goals after the start of the second half, but eventually lost. Manchester City is already in a series of nine consecutive victories in the championship, which gives them them the leading position s and a six-point advantage over Liverpool (one game less) and Chelsea.

Brentford's eventual success in stopping the Manchester City series will come as a big surprise. If we look at the results of the "Citizens" we will notice that their shoots were actually against teams that at this stage of the season have performed very strongly in defense. Man City lost in the first round with 1:0 against Tottenham, recorded a 0:0 draw with Southampton in a period when the Saints played very well defensively and lost 2:0 to Crystal Palace.

At the moment, Brentford is definitely not in good shape and will find it difficult to keep a clean sheet against the champions. The Bees have not conceded a goal in just one of their last 12 matches in the league. The fact is, however, that as a host, Brentford can create headaches for any opponent. The "Bees" ended in a draw 3:3 with Liverpool, and against Chelsea only the good interventions of Edward Mendy and bad luck prevented them from taking a point (1:0 loss). Manchester City's previous six away games have seen both teams to score. The increased odds of this happening again against a good host like Brentford give good value.