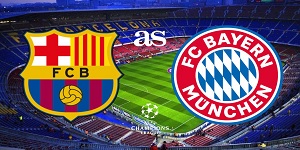 The highlight of the Champions League program this week is Barcelona - Bayern Munich. The clash is from Group C, where the Germans are undisputed leaders without a misstep so far. The Spanish representative will most likely finish the season in the Europa League, as Inter will hardly make a mistake in hosting the outsider Pilsen.

The first meeting between Barca and Bayern was won 2:0 by the Germans. It was their fifth consecutive win in this rivalry. The Spaniards are even without a scored goal in three consecutive meetings. Today, however, they need a much-needed three points to, if not keep hopes alive, at least wash away the shame of this year's Champions League performance.

Barcelona came out badly in the two meetings with Inter. The Blaugrana went down 1-0 in Milan, and at the Camp Nou they saved themselves a 3-3 stoppage-time goal from Lewandowski. Bayern Munich easily beat Inter with 2:0 already in the first round. Of course, none of the three European giants have made a mistake so far against the underdogs Pilsen.

Barcelona recorded a second consecutive convincing home win in La Liga at the weekend. The Blaugranas thrashed Athletic Bilbao 4-0 to keep a three-point deficit on Real Madrid. Bayern Munich defeated a treacherous opponent for them. Hoffenheim's visit was won 2:0, but the champions still remain second in the Bundesliga standings.

A month and a half ago, Bayern could have won, but in the first part they literally survived. The guaranteed place in the round of 16 hardly reassures the Bavarians, who are certainly going for victory today. This time though, I think Barcelona will end the terrible run of this rivalry. The fact is that so far the hosts have not won all the meetings with difficult teams in the form of Bayern, Inter and Real Madrid. However, I trust Xavi and his boys to have better luck in front of Neuer's goal this time around.