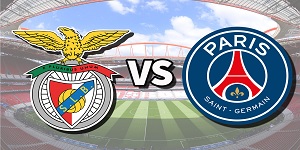 In the third round of the Champions League group stage, we will see a battle for the top of Group N. PSG and Benfica are tied on six points, and the first meeting between them will be in Portugal, which gives the Eagles a chance to spring another surprise in the tournament. This will be no stranger to them as they have won all three of their official home games against the Paris club this century.

Benfica are full of points thanks to wins over Maccabi Haifa and Juventus. The Eagles were the better team in both games. The team from Israel was defeated after two quick goals for 2:0 at the beginning of the second half. In Italy, however, Benfica took to the field as underdogs, but that didn't stop them from being the better team on the field and pulling off a complete turnaround with a 2-1 win.

PSG's performance in the tournament continues without surprises. Kylian Mbappe scored two quick goals in the first round as Juventus won 2-1 in Paris. In the second round, the champion of France visited Haifa, where he fell behind in the result, but, as expected, created a complete turnaround and won with 3:1. The goals were the work of the attacking trio Messi-Mbappe-Neymar.

Benfica's performance this season has been impressive. On Saturday, the Eagles kept one of their many clean sheets to date but were unable to beat Vitoria Guimaraes. This draw was the first failure for the team after thirteen wins in thirteen games. Meanwhile, PSG won 2-1 at home to Nice to maintain their two-point lead over Marseille at the top of Ligue 1.

Undoubtedly, PSG will face a difficult match in Portugal against a strong opponent. History favors the hosts, but class undoubtedly tips the scales in the opposite direction. I expect an interesting match in which PSG will win, but Benfica will not give up and put up serious resistance. Keeping a clean sheet is definitely not a priority for Christophe Galatier's team and I think we are in for a more productive clash.