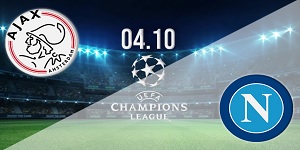 It was expected to be interesting in the first group of the current edition of the Champions League and it is. We see a very shaky performance from first place favorites Liverpool and a convincing leader in Napoli, and Ajax are definitely not a team to be written off. The standings after the end of today could put the top three teams level on 6 points, but for that to happen Liverpool need to beat Rangers and Ajax to deal with Napoli at home.

The Eredivisie champions are now without a win in three official matches. This bad run started with a poor game at Anfield, which was on the way to getting them a point. However, Matip scored in the 89th minute for 2:1 in favor of Liverpool. This was followed by a 1:2 loss to AZ Alkmaar, and on Saturday there was a 1:1 home draw with G.A. Eagles at home.

Napoli have enjoyed an exceptionally good run of form since the start of the season. The wins are piling up one after the other, with six of them in a row so far. The team failed to beat only Fiorentina and Lecce in a total of eleven official matches, and there is still no loss. In the Champions League, the Sky Blues beat Liverpool 4-1 at home, and against Rangers in Glasgow, the result was classic in their favour.

We are definitely expecting an equal match, in which the host Ajax has the advantage on its own ground, but the form is entirely in favor of the guests. Personally, I would offer more equal success odds for both teams, as I do not think that the hosts are favorites. In my opinion, Napoli will leave Amsterdam with at least a point, and a goal in both goals looks like the basis of this clash.