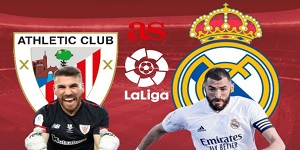 Athletic Bilbao welcomes Real Madrid in the 21st round of La Liga. After a tough November and the first half of December, the Lions finally won three points, beating Betis 3:2 over the weekend. This was the first victory for Athletic Bilbao since October 23, when they beated Villarreal 2:1. In the next eight rounds, the Basques added just five points, which logically dropped them to ninth place in the standings.

Problems with quarantined players had their impact and Real Madrid did not beat Cadiz over the weekend. Despite the superiority of the White Ballet, the two teams shared a point after a draw. To a large extent, Eden Hazard can be considered a big debtor to his team, having made two serious misses, one of which at the very end of the match. The Belgian does not take advantage of one of the rare cases in which he starts as a starter and it will be interesting to see if he will keep his place on the field against the Lions.

Although the series of seven consecutive victories for Real ended, Madrid remain the big favorite for the title in Spain. The lead over the second Sevilla is six points, but the problems of the Andalusians as a guest call into question whether they will keep up with the pace shown by the players of Carlo Ancelotti. The Italian specialist has greatly improved the game of his team in defensive terms and at least for now it does not seem that there will be many teams against which Real Madrid will have problems.

To a large extent, the collapse in the form of Athletic Bilbao is due to the program in La Liga. When it came time for matches with rivals from the top half of the standings, the Lions fell behind in the standings. In fact, against teams from the current Top 10, Athletic Bilbao won for the first time just this weekend, beating Betis 3:2. The Basques even lost their home to Rayo Vallecano. The first match between Real Madrid and Athletic Bilbao this season in early December ended in success with 1: 0 for Madrid. I expect a repeat of this match and minimal success for the guests. This match marked the beginning of Real's series of four consecutive La Liga without conceding a goal.